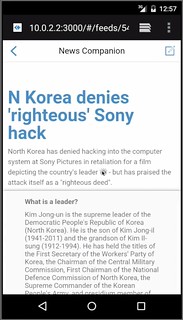 We recently ran a hackathon at work: people within IBM were invited to try building a mobile app aimed at consumers using Watson services. It was a fun chance to try out some new ideas, as well as to build something using our APIs – dogfooding is always a good thing.

I worked on a hack with David which we submitted on Wednesday. This is what we came up with, and how we built it.

A mobile app that will help users to digest the news by explaining references in stories and providing greater context.

It’s difficult to find the time nowadays to properly read and understand what’s going on in the world. We rarely have the time to sit and read through a newspaper. Instead, we might quickly read news stories online from our smartphones and tablets. But that often makes it difficult to understand the broader context that a story is in. There might be references in the story to people, places, organisations or events that are unfamiliar.

Watson could help. It could be an assistant as you read the news, explaining unfamiliar references and the broader context.

Our Watson News Companion demo is a mobile news reader app that:

A video walkthrough of the hack

The hack was built as a mobile web app using the MEAN stack: using express as the framework on a Node.js platform, storing some information in a MongoDB and building the UI with AngularJS.

It uses RSS feeds from news websites to fetch content, which are shown in a simple newsreader app built using Ratchet.

The contents of the story is run through the Watson Relationship Extraction API to pick out the people, places, organisations, and other entities mentioned in the story.

The API output includes co-references, to identify the multiple mentions of the same entity. These are combined and reviewed, and together with the type of the entity are used to generate likely questions about the entity.

These questions are sent to the Watson Question and Answer API. For questions which are returned with answers with a high confidence, annotations are added inline to the news story. Pressing the annotation brings up a sliding panel at the bottom of the screen with the answer to the question. The links and footer annotations are built using bigfoot.

Every screen in the app also includes an “Ask Watson” button which lets the user enters any free text question to let them dig deeper into what they’ve read.

Could you build this?

This was a proof-of-concept built in a hurry, so we’re not calling this a finished app. But everything we used is freely available – both to people inside IBM and the public.

A beta version of the Watson Relationship Extraction API is freely available for apps hosted on Bluemix.

A beta version of the Watson Question and Answer API is freely available for apps hosted on Bluemix. But this is a demo instance of Watson that has only read a small number of general healthcare documents. That’s not a useful corpus for our hack, so to record our demo we stood up our own instance – using an untrained instance of Watson which we gave a small subset of Wikipedia to read. We used the Question and Answer API on this instance instead of the Bluemix one. For people outside IBM to do this, they need to sign up to join the Watson Ecosystem. This is also free, but there are criteria for who is eligible at this point, and an application process to go through.