If I don’t post a few notes from today’s Open Data Camp now, I never will, so here are a few things I scribbled down- it could be worse, I could have posted a PDF containing photos of the the actual scribbles!

So out of this choice… 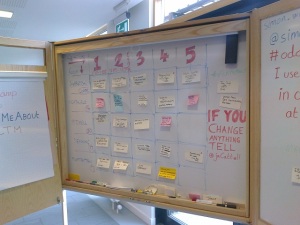 I’ve been following @floppy‘s crazy plan to get elected for a while, so this was the easiest decision of the day: what drives someone to embrace the gory inner workings of democracy like this?

Falling turnout it would seem, and concern for a functioning democracy.

The first step of his journey was the Open Politics Manifesto, which I’ve so far failed to edit- must try harder.

Perhaps more interesting was how this, and use of open data, fits into a political platform as a service. It would be nice to have the opportunity to see a few additions to the usual suspects at the ballot box, and Eastleigh got a rare chance to see what that could be like with a by election. Perhaps open data services for candidates could tip he balance enough to encourage more people to stand.

@floppy and @giacecco introduced the (huge) problems they need to overcome to rebuild a large data set without polluting that data with any sources with intellectual property restrictions. Open Addresses still have a long way to go and there were comments about how long Open Street Map has been around, and it still has gaps.

They have some fun ideas about crowd sourcing address data (high vis jacket required) and there are some interesting philosophical questions around consent for addresses to be added.

It will be interesting to see whether Open Addresses can get enough data to provide real value, and what services they build.

Mark and Laura led a discussion around data literacy founded in the observation that competent people, with all the skills you could reasonably expect them to have, still struggle with handling data sets.

Who needs to be data literate? Data scientists? Data professionals? Everyone?

Data plumbers? There were some analogies with actual plumbers! You might not be a plumber but it’s useful to know something about it.

If we live in a data driven society, we should know how to ask the right questions. Need domain expertise and technical expertise.

@johnlsheridan pointed out that the least interesting thing to do with legislation is to publish it and went on to share some fascinating insights into the building blocks of statute law. It sounds like the slippery language used in legislation boils down to a small number of design patterns built with simple building blocks, such as a duty along with a claim right, and so on.

Knowing these building blocks makes it easier to get the gist of what laws are trying to achieve, helps navigate statutes, and could give policy makers a more reliable way to effect a goal.

For example, it’s easier to make sense of the legislation covering supply of gas, and it’s possible to identify where there may be problems. The gas regulator has a duty to protect the interests of consumers by promoting competition, but that’s a weak duty without a clear claim right to enforce it.

John also demonstrated a tool – http://ngrams.elasticbeanstalk.com – exploring how the language used in legislation has changed over time, for example how the use of “shall” has declined and been replaced by “is to be”.

My choice of Android tablet was largely based on what might work reasonably well for maps and augmented reality, so I seized this opportunity!

Nick Whitelegg described the Hikar Android app he’s been working on, which is intended to help hikers follow paths by overlaying map data on a live camera feed.

The data is a combination of Open Street Map mapping data, with Ordnance Survey height data, which is downloaded and cached as tiles around your current location. Open GL is used to overlay a 3D view of the map data on the live camera feed, using the Android sensor APIs to detect the device’s rotation.

I’ve just downloaded and installed Hikar and, while my tablet is a tad slow, it works really well. I live somewhere flat and boring but the height data made a noticeable difference when Nick demonstrated the app in hilly Winchester.