I was a recent University graduate, arriving at IBM’s R&D site in Hursley for the first time. I remember arriving in Reception.

Reception – the view that greeted me when I arrived

It was a Wednesday.

How did that happen?

It was never The Plan. The Plan (as cynical as it sounds in hindsight) was that I’d stay for two or three years. I figured that would be long enough to get experience, and then I’d leave to work at a small nimble start-up which was where all the “cool” work was.

The Plan never happened. A few years passed, and then another few… I kept saying that I’d leave “later” and before I knew it a ten year milestone has kind of snuck up on me.

I think I’m more surprised than anyone. I’ve never been at any place this long. I was at Uni for five years. The longest I was at any school was four years.

It’s a serious commitment, and one I never realised that I had made. I’ve not even been married for as long as I’ve been with IBM.

So why? Why am I still here?

I’ve spent ten years working for the same company, but I’ve had several jobs in this time.

I’ve been a software developer. I’ve been a test engineer. I’ve been a service engineer, fixing problems with customer systems. I’ve worked as a consultant, advising clients about technology through presentations and running workshops. I’ve done services work building prototypes and first-of-a-kind pilot systems for clients.

I’ve worked on middleware technology, getting some of the biggest computer systems in the world to communicate with each other, reliably, securely and at scale. I’ve used analytics to get insight from massive amounts of data. I’ve worked on large-scale fingerprint and voiceprint systems. I’ve used natural language processing to build systems that attempt to interpret unstructured text. I’ve used machine learning to create systems that can be trained to perform work.

I’m still learning new stuff and still regularly have to figure out how to do stuff that I have no idea how to at the start.

Some views of the grounds around the office

I get to do more than just a “day job”

I’m a developer, but that doesn’t mean I’ve spent ten years churning out code 40 hours a week. There’s always something new and different.

Hursley House – where I normally work when I have customers visiting

I work on stuff that matters

Tim O’Reilly has been talking for years about the importance of working on stuff that matters.

“Work on something that matters to you more than money”

If you’ve not heard any of his talks around this, I’d recommend having a look. There are lots of examples of his slides, talks, blog posts and interviews around.

I can’t do his message justice here, but I just want to say that he describes a big part of how I feel very well. I want to work on stuff that I can be proud of. Not just technically proud of, although that’s important too. But the pride of doing something that will make a difference.

Working for a massive company gives me chances to do that. I’ve worked on projects for governments, and police forces, and Universities. I’ve done work that I can be proud of.

For the last couple of years, I’ve been working on Watson. It’s a very cool collection of technologies, and watching the demo of it competing on a US game show has a geeky thrill that doesn’t get old. But that’s not the most exciting bit. Watson could be a turning point. This could change how we do computing. If you look at what we’re trying to do with Watson in medicine, we’re trying to transform how we deliver healthcare. This stuff matters. It’s exciting to be a part of.

These are the views that surround the site

Hursley is a campus-style site. It’s miles from the nearest town, and surrounded by fields and farms. It’s quiet and has loads of green open space.

My commute is a ten minute drive through a village and fields.

I don’t have to wear a suit, and I don’t stand out coming to work in a hoodie and combat trousers. Flexitime has been the norm for most of my ten years, and I am free to plan a work day that suits me. When I need to be out of the office by 3pm to get the kids from school, I can.

My kids are at a school half-way between home and the office, so I can do the school run on the way to work. As the school is only five minutes from work, I often nip out to see them do something in an assembly, or have lunch with them.

This is a nice aspect of the school – that parents are welcome to join their kids for lunch, and have a school dinner with them and their friends in the school canteen. But still… it’s pretty cool, and if I didn’t work just up the road from them, I wouldn’t be able to do it.

Once a month, I bring them to work in the morning before school starts for a cooked breakfast in the Clubhouse with the rest of my team.

All of this and a lot more tiny aspects like it add up to a lifestyle that I like. Some of my train tickets from the last few years

I get to see the world

But I’d hate a job where I lived out of a suitcase and never saw the kids.

I’ve managed to find a nice balance. I travel, but usually on short trips and not too often.

In 2006, I worked at IBM’s La Gaude site near Nice. In 2007, Singapore, Malaysia, Philippines and Paris. In 2008, I worked in Copenhagen, Paris and Hamburg. In 2009, I worked in Munich many times, and Rotterdam. In 2010, Stockholm. In 2011, Tel Aviv and Haifa in Israel, Austin in Texas, Paris and Berlin. Last year, I worked in Zurich and Littleton, Massachusetts.

This year, I’ve been in Rio de Janeiro and Littleton again, and it looks like I’ll be in Lisbon in December.

Plus working around the UK. It’s less glamorous, but it’s still interesting to go to new places. I’ve worked in loads of places, like Edinburgh, York, Swansea, Malvern, Warwick, Portsmouth, Cheshire, Northampton, Guildford… I occasionally have to work in London, although I tend to moan about it. And I spent a few months working in Farnborough. I think I moaned about that, too.

Travelling is a great opportunity. I couldn’t afford to have been to all the places that IBM has sent me if I had to pay for it myself.

My office today (left), compared with some of the other desks I’ve had around Hursley

The pay is amazing! 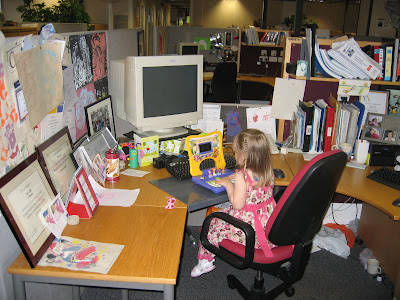 Will I be here for another ten years?

I’m trying to explain why I’m happy and enjoying what I do. I’m not saying I couldn’t get exactly the same or better somewhere else. Because I don’t know. Other than a year I spent as an intern at Motorola I’ve never worked anywhere else. For all I know, the grass might be greener somewhere.

Will I still be here in another ten years? I dunno… I do worry if that’s unambitious. I wonder if I should try somewhere else. I wonder if only ever working for one company is giving me an institutionalised and insular view of the world.

I keep getting emails from LinkedIn about all the people I know who have new jobs. There are a bunch of people I used to work with at IBM who have not only left to work at other companies, but have since left those companies and gone on to something even newer. While I’m still here.

Am I destined to be one of those IBMers who works at Hursley forever? That’s a scary thought.

For now, I’m enjoying what I do, so that’s good enough for me.

Happy 10th anniversary to me.

"Why am I still at IBM?" was posted by Dale Lane to http://dalelane.co.uk/blog/?p=2870.
Feed footer idea nicked from 43 Folders using the FeedEntryHeader WordPress plugin.