IBM, amongst other things, runs the official Wimbledon website during the event. This has lots of exciting well designed tennis information, real time scores and we deal with a large volume of traffic. Most years I am onsite for a period of time, helping explain how we bring innovation to our customer as part of a large cross IBM team. In the lead up to the event, and with what I know about the data we have, I decided to take on a mini proof of concept to bring Wimbledon to Second Life.

The first point is that this is a proof of concept. The build is designed to show the various ideas rather than be a 1:1 representation of the actual place. That’s very possible, but would take more days to build.
Secondly, lots of people could attend, the shots show only one avatar.

The example security gate is there to show you can detect things about peoples avatars in this case it shows the name and if they are wearng anything that contains code. 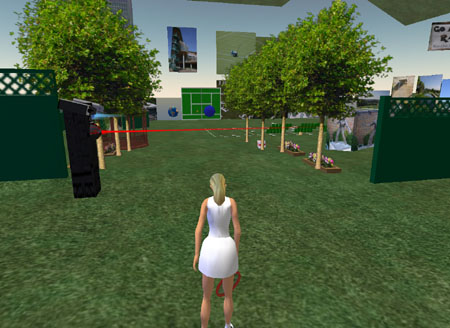 The first item on the tour is the RSS weather feed globe. It updates now every hour from a weather service, but has a manual overide for some other cities to prove its not all smoke and virtual mirrors 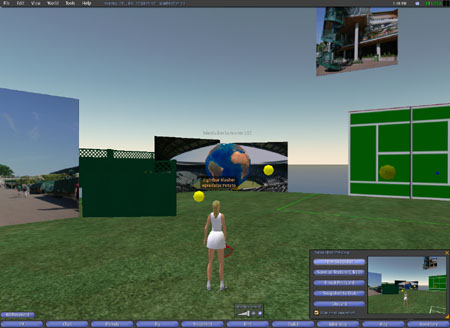 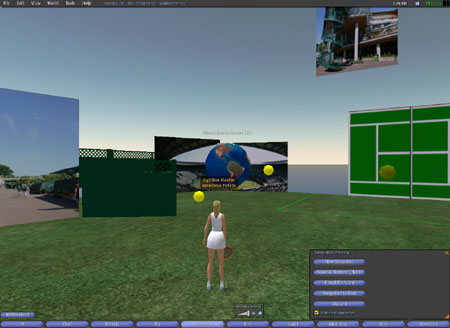 Next is the highlight. The real world tracking data for actual tennis matches. We get a feed for the normal web scoreboard and the point tracker. Here we plot the ball in 3d space and can rotate around it for various angles. The net is actually in control, if it gets told another url to use it plays another rally. This can be done manually, by talking to it, or by another control box that cycles through the various games.
We could put players on this, with the extra data we have on which shot has been played and knowing when the ball changes direction, but I was working to a timeframe. 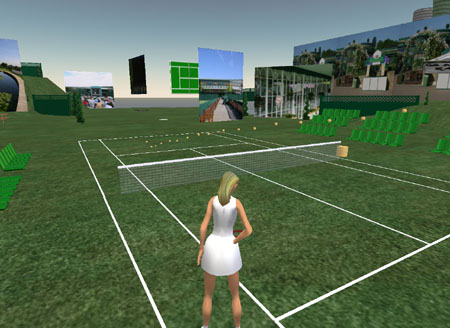 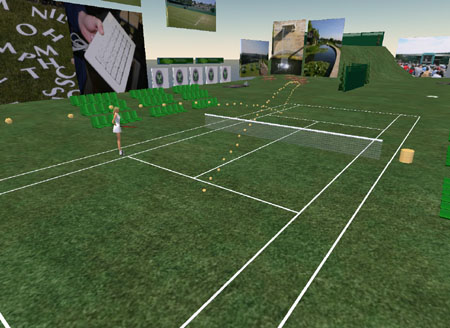 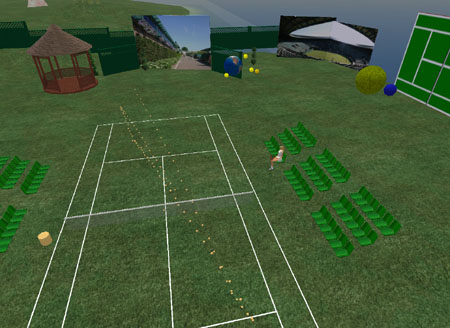 This shows several concepts. The main one is the 2 spheres, these are ambient devices that change size depending on who is winning the match, it shows the ambient device concept.
The picture on the right is of the IBM special keyboard used to record the matches, with keys for forehand smash, volley etc. 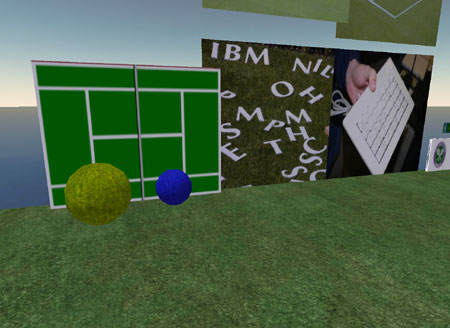 This shows one of the special products at work. The flying wimbledon towel. When anyone clicks the towel it act like a normal banner ad and directs them to the real wimbledon shop for the real towel. This banner add though can be flown as a vehicle. So I can fly around, advertising in places without leaving the ad lying around on private property. Avatar based marketing. 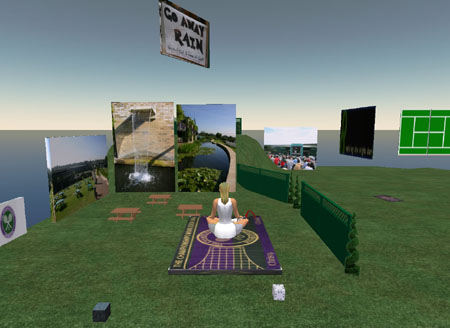 These images show a mixture of photo panels of things at Wimbledon and 3d objects such as the park benches. Just to add a bit of character. The go away rain sign is a legacy of many championships.

This is the most recent addition. advert watching posts. Stand in front of each of the screens and a streaming video of the IBM adverts with people from the AELTC and the BBC talking about Wimbledon, IBM and innovation

Whilst the trigger for the video is standing in front of a particular one (and hitting the movie play button in SL) the video will play on all the screens at once. It does not have to do this, I just liked the effect. 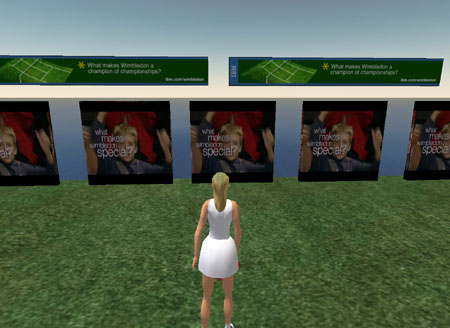 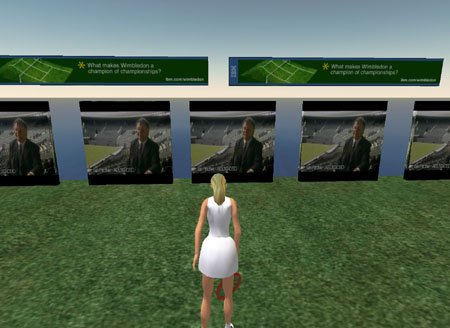 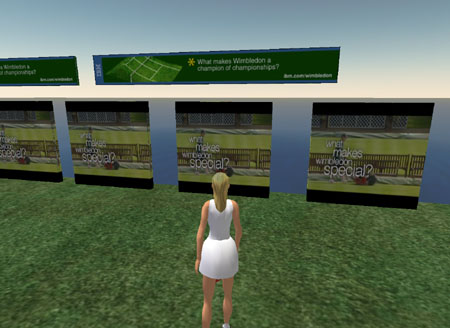 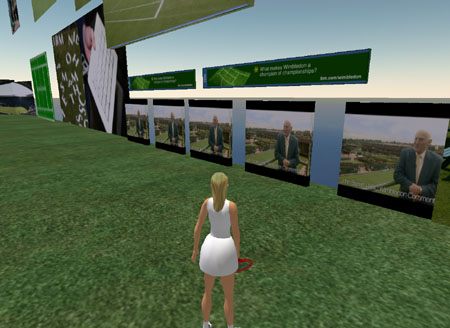 This is sort of Henman hill. Again to show a hint and nod to the real place. The video wall in this case is showing one of last years flash scoreboards, to show the analogy with the full size court and the previous web incarnations for tracking the ball. 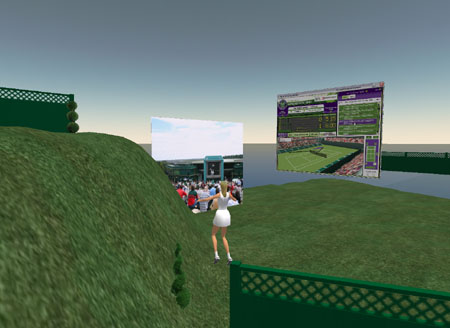 Again this is a flavour of mixing 2d pictures with 3d objects the line of benches coming out of the space, giving depth. 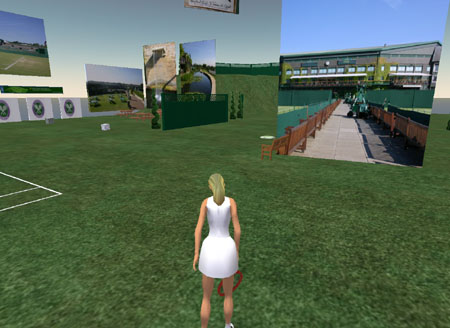 More example pictures, with fencing and plants to show the potential 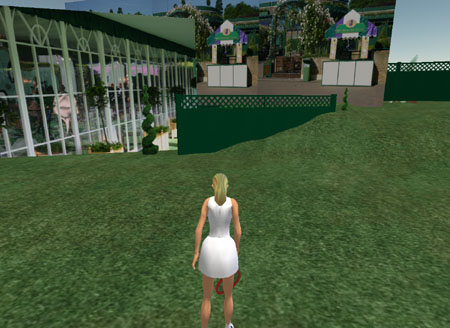 These pictures show an object raining multiple tennis balls down. No real reason its just fun, It actually the same code as the full court but the balls are physical, and hence fall rather than the one on the court demo that hang around, to help show the path of the ball. 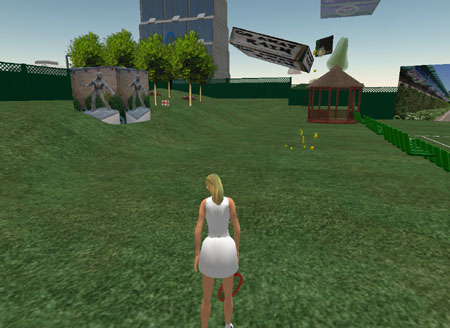 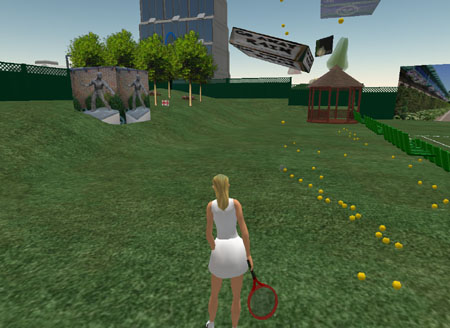 The Fred Perry statue can be touched, and it will get the RSS feed from wimbledon.org 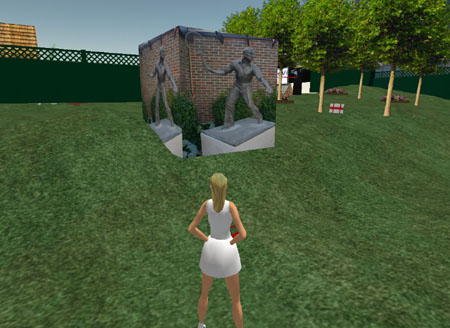 The chat history window shows us what Fred said, and formats its nicely. 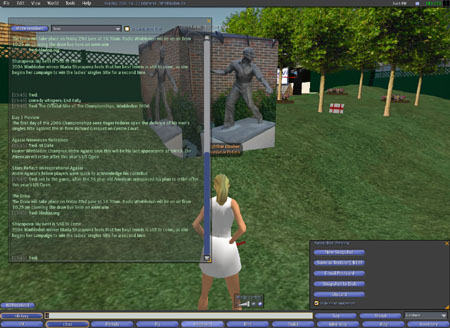 Further up in the air, to use the small real estate, is a hovering Wimbledon shop. 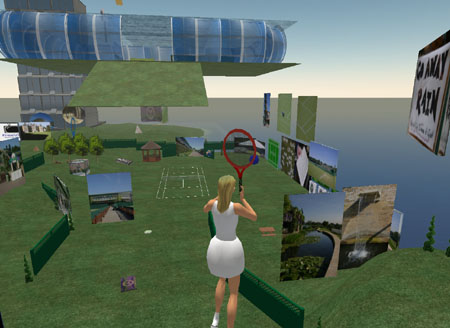 The products in the shop include a Tshirt, using the actual tshirt as source to build a SL Tshirt that can be worn (see last photo). This shows the flow of money and product placement. 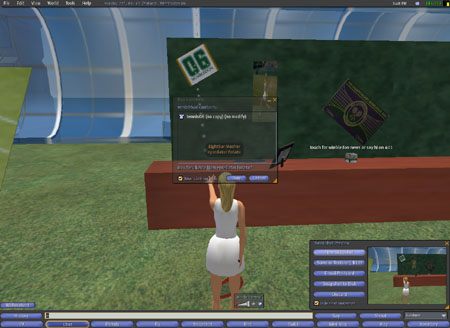 We also have some pose balls. These allow us to put an avatar in a pose when they are attached to it. In this case two backdrops with different poses. People then are able to take snapshots of them ‘in action’ like in new citizens plaza, but tennis branded. 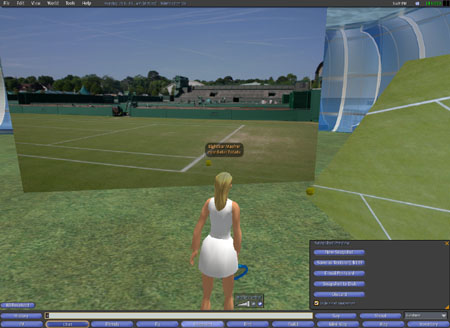 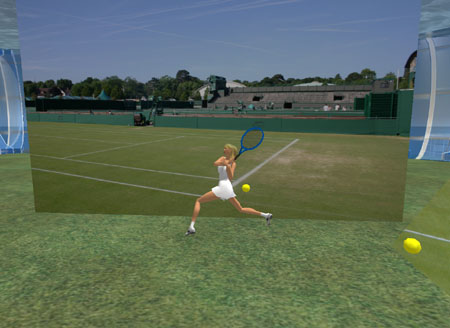 The avatar I am wearing is available for sale from a poster of the avatar. Again shows the flow of money and the potential to look like real people. 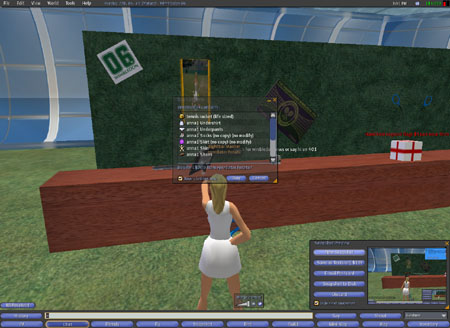 We have a pagoda in the sky, its also a video wall showing one of the IBM vignette adverts. 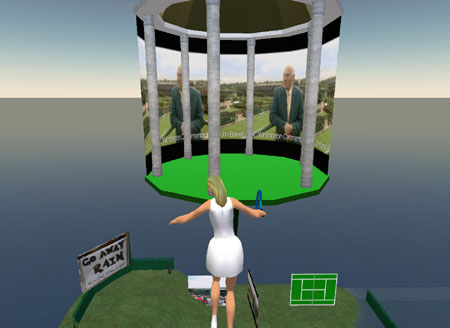 So you can fly in and be immersed in the video. 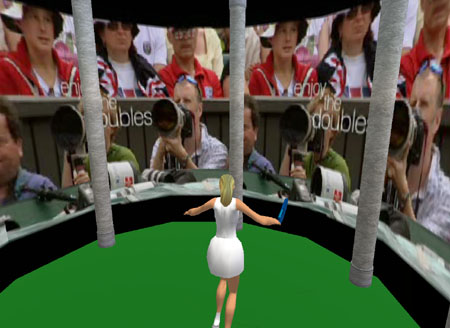 And there we have it. Back to a normal(ish) look, but wearing my Wimbledon 06 tshirt.
If I leave the private Hursley island everyone will be able to see this shirt 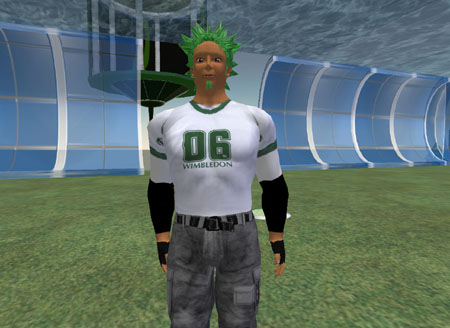 We could do a whole lot more with the browser as a texture gecko engine, but for now the httprequest has made much of this much easier
For more on what IBM does at Wimbledon it really is a fantastic effort and a great partnership.
That is just the start of IBMers in the Metaverse.

48 thoughts on “Wimbledon in Second Life”